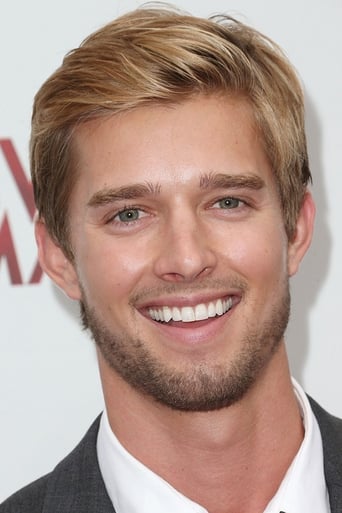 Drew Van Acker was born in Philadelphia on April 2nd, 1986. He moved a lot as a child before settling in Medford, New Jersey at the age of 10. He practiced almost every sport, including: soccer, lacrosse, wrestling and basketball. Drew’s true passion, though, was acting, so he joined his high school drama classes. It all started by watching the Star Wars trilogy along with films that featured Robert De Niro in a starring role. His soccer abilities lead him to receive a soccer scholarship to Towson University in Maryland. While attending Towson, Drew took a number of theater courses in order to re-focus on acting. By his sophomore year in 2005, he had an encounter with a talent scout from ProScout (one of the United States’ leading talent agencies) and moved to New York City. It all began with a few years of notable modeling work, the majority as an underwear model, for International Jock, Abercrombie & Fitch, and American Eagle. He also served as an extra. Drew did some background work in 2006′s The Good Shepherd, which starred none other than Robert De Niro. After working with B-1 Models in New York City, he made the move to Los Angeles to pursue the transition to acting. He soon signed with Shepard Smith Management, followed by the WME agency (William Morris/ Endeavor). His first credited role came as Donny Kendall on ABC’s Castle, a murder victim and son of a once wealthy family gone broke. Next came 12 WB.com webisodes of The Lake. Followed by an episode of ABC Family’s Greek, all in 2009. His acting credits also include Fortress, an action independent film. His break came in 2010 as the lead in the live-action Cartoon Network show Tower Prep, where he played Ian Archer, a teen suspended from high school who wakes up in a mysterious prep school, unaware of where he is or how to get out. While filming in Vancouver, he caught the eye of executive producer Glen Morgan (known for his work on TV shows such as X-Files and whose movie credits include Willard and Final Destination). It turns out, Morgan was a good friend of a producer working on Pretty Little Liars, a show based on a popular series of books that was looking for an actor to replace Parker Bagley, who had been playing the role of Jason DiLaurentis, after its successful first season. They set up a meeting and said Drew would be perfect for the role. He joined the cast of Pretty Little Liars when the 2nd Season began. When Drew debuted as the new Jason, he was quickly adopted by fans, with Sara Shepard, the writer of the original book series, even taking to Twitter to say he was more like the character she had imagined on paper.