Two big wins for two young directors. Over the weekend, the 69th Annual DGA Awards were announced. As expected, La La Land director Damien Chazelle won the main prize for Best Director, meaning he'll likely go on to win the Oscar. Lion director Garth Davis won the award for Best First Feature. The Directors Guild Awards are one of the top awards in Hollywood, and it's exciting to see Damien Chazelle win. This is is his first nomination, and his first win, despite getting lots of attention for Whiplash he didn't make the cut that year. I'm surprised to see Davis win for Lion, but Lion seems to be the sleeper favorite in Hollywood that many people are voting for. Congrats to both Damien and Garth, both first time nominees and winners.

The winners of the Directors Guild of America Outstanding Directorial Achievement Awards for 2017 were announced on Saturday, February 4th, during the 69th Annual DGA Awards Dinner at the Beverly Hilton in Los Angeles, California. You can check out the full list of this year big's winners, which also includes other honors for directing for TV series and commercials, from the official DGA website. Chazelle + Iñárritu: 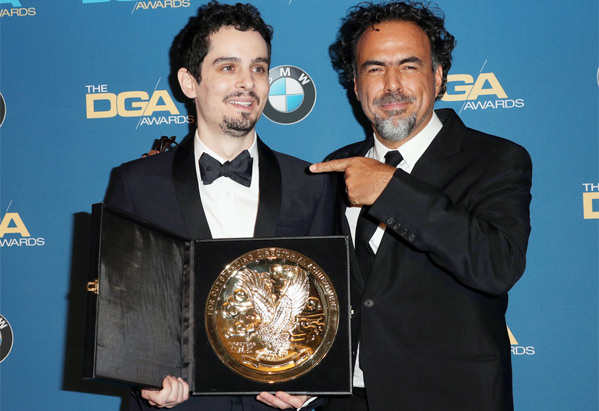 This year, La La Land's Damien Chazelle beat out fellow nominees: Garth Davis for Lion (who went on to win Best First Feature anyway); Barry Jenkins for Moonlight; Kenneth Lonergan for Manchester by the Sea; and Denis Villeneuve for Arrival. Very strong list of nominees this year - all five of these films are fantastic. As for the Best First-Time Feature, Lion's Garth Davis beat out fellow nominees: Kelly Fremon Craig for The Edge of Seventeen; Tim Miller for Deadpool; Nate Parker for The Birth of a Nation; and Dan Trachtenberg for 10 Cloverfield Lane. Also another excellent set of nominees, all of their films worth seeing if you haven't watched them yet. Congrats to all of the nominees - every single one this year was nominated for their first time. Coming up next - the Academy Awards on February 26th.

The previous six winners of the Directors Guild Award include: Alejandro González Iñárritu back-to-back for The Revenant and Birdman, Alfonso Cuarón for Gravity, Ben Affleck for Argo, Michel Hazanavicius for The Artist, and Tom Hooper for The King's Speech. The DGA Awards have been given out ever since 1948.

Drive-in movie theaters are pretty much a thing of the past, with barely any around still surviving....

Two big wins for two young directors. Over the weekend, the 69th Annual DGA Awards were announced. A...

All 15 Oscar Nominated Short Films Playing in Theaters in February

This is exciting news! ShortsHD, an online short film channel, has announced that they have partnere...

With the Sundance Film Festival wrapped up in Utah, Hollywood took over to announce the Screen Actor...

The official awards for the 2017 Sundance Film Festival were announced tonight at a ceremony in Park...

English actor Sir John Hurt has passed away at age 77. The sad news was confirmed by his agent, via ...

The complete list of nominees for the 89th Academy Awards, the most prestigious award in Hollywood, ...

Briefly: Lucasfilm has officially announced the new title of the next Star Wars movie - it will be c...